Slow down to “woods time”

It was West Virginia “Buck Season” — 1986. I didn’t know it, but I was about to learn a valuable lesson. I was sitting on steeply-leaning tree, which jutted out from an even steeper hillside, simply straddling the tree, as if riding a horse. A deep fork at the top of the tree made a natural rifle rest. I was young enough and foolish enough to enjoy using such an uncomfortable and unsafe “stand.”  My attention was focused on heavily-used deer trails on the ridge across the hollow from my perch.

Suddenly, in the laurel right under my tree, a big set of antlers simply appeared, hovering above the bushes. A second later, with one step, the rack vanished once again into the laurel thicket. I was mentally kicking myself for being so engrossed with glassing the trails on the other ridge that I had let a really nice buck slip in, then slip away. I felt like my hunt was over. I continued to sit in the tree but had really given up on the hunt for the day.

Then, at least 20 minutes later, the buck carrying the big antlers stepped into an open spot and I shot him at about 40 feet! He hadn’t gone anywhere. In fact, he had moved less than 20 feet in twenty minutes. 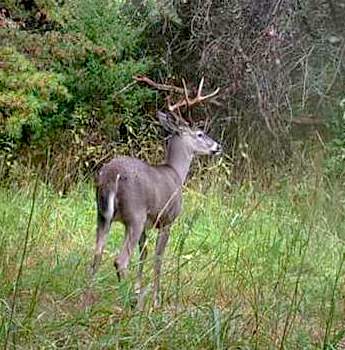 Animals don’t have the same concept of time that we do.

The world most of us live in moves at a rapid pace. It seems that we always have somewhere we need to go and something we need to do. Most people have a very short attention span. It’s hard for lots of folks to slow down to “woods time.”

The next time you go hunting, try allowing yourself a little more time walking to your stand. If you feel the urge to head back to camp, allow yourself to sit another 20 or 30 minutes. If you are still hunting, spend more time looking than walking. Pause for a second before stepping over that ridge, or around that turn in the logging road. Don’t let yourself rush.

Good luck to all the hunters heading into the West Virginia fields and forests next week. Hunt hard. But remember, slow your mind down to “woods time.” Not only will slowing down a bit make for a more enjoyable, relaxing outdoor adventure, it will likely make you a safer, more successful hunter.

Wade Shambaugh has lived in Morgan County his whole life and is a lifelong outdoorsman.