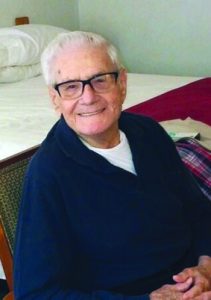 Roger E. Fox, age 94, of Berkeley Springs, W.Va., died on Thursday, November 17, 2022 at Hampshire Memorial Hospital Extended Care Unit in Romney, W.Va., where he had been a resident for the past 4½ years. He had been in failing health and suffered a heart attack on October 9, from which he could not recover.

In 1955 the Fox family moved to Pennsylvania, where Roger worked many years for the J.S. Hershey Baking Company and Canteen Vending Corporation. Upon returning to West Virginia in 1989, the couple resided at the Berkeley Square Apartments, where he was the property manager for many years.

He is survived by two daughters, Carolyn Diane Fox of Ayer, Mass. and Catherine Ann Bennett of Hancock, Md., two grandchildren, Heather Michael and Steve Henry both of Berkeley Springs, seven great grandchildren, and one great great grandson and many nieces and nephews.

Roger was a man of faith and a wonderful husband, father and papa. He will truly be missed by many.

Due to his wishes, there will be no services. He will lie next to his beloved wife in Pleasant Hill Cemetery in Sleepy Creek.

Donations may be made in his memory to Hampshire Memorial Hospital Extended Care Unit, 363 Sunrise Blvd, Romney, WV 26757 or to Hospice of the Panhandle, 330 Hospice Lane, Kearneysville, WV 25430.