The promise of bringing a Fireman’s carnival back to Morgan County is just weeks away from being a bright, twinkling reality at South Morgan County Volunteer Fire Company.

South Morgan fire company will host a nightly Fireman’s Carnival on their grounds at 10166 Winchester Grade Road from August 30 to September 3.

Snyder’s Attractions of Greencastle, Pa. will set up a dozen carnival rides and traditional carnival food booths on South Morgan’s paved parking lot. A music bandstand will be set up behind the fire hall for nightly performances by regional bands, and an arcade and games of chance will be operated by T&K Amusements. Other carnival attractions will include a dime toss, dunk tank with local “targets,” bingo and tip jars.

Fire company representative Dale Heironimus, one of the carnival organizers, told The Morgan Messenger that the event is both a fundraiser and a way for the fire company to bring something to town for local kids.

“This is about community, about giving back,” he said.

Entry to the carnival will be free. Tickets will be sold for the rides, including an “all-night” armband for one price. The public can buy those those armbands at a reduced price through August 12 on the carnival website https://www.firemanscarnival.com. A wristband and food voucher combo can also be purchased online.

Heironimus said South Morgan’s intention is to host the carnival not just this year, but for several more to come. Snyder’s Attractions is on board with that, he said.

South Morgan Volunteer Fire Department will still hold their Annual Yard Party on Saturday, as they have during Labor Day for more than 50 years. That will include the traditional ham and fried chicken dinner and live auction. Heironimus said that is an important tradition in the Greenwood area and will continue this year in conjunction with the carnival.

Parking at the carnival will be located in the field south of the fire hall. There will be a designated handicapped drop-off and parking area, too, said Heironimus.

Orange safety fencing will be installed at the edge of the carnival ride area along Winchester Grade Road, and Sheriff’s Reserve deputies will assist the fire company with traffic control during the week’s events, he said.

Carnival foods like funnel cakes, candy apples and cotton candy will be on offer by Snyder Attractions, while South Morgan Fire Department will serve up hamburgers, nachos, hot dogs, french fries and drinks at their covered pavilion.

Heironimus said there will be a change machine and ATM on site during the carnival.

Area bands will take the stage each night of the carnival.

Wednesday’s stage will be taken by The Spinouts with Taylor Brown at 7 p.m.

On Thursday, September 1, Morgan County Line will play at 7 p.m.

On the final night of the carnival, Bobby D & The Truckstop Burritos will play at 7 p.m.

The public should bring their own chair to enjoy the performances.

Another kind of entertainment will be the carnival’s three eating contests. Contestants can compete to see who will down the most hamburgers, watermelon or pizza during the week. Watch the carnival website for details.

Volunteers have already signed up to help fire company members run the nightly event, but more are always welcome, said Heironimus. Anyone interested in pitching in to help with food or other duties can contact him at southmorganvfdco3@gmail.com. 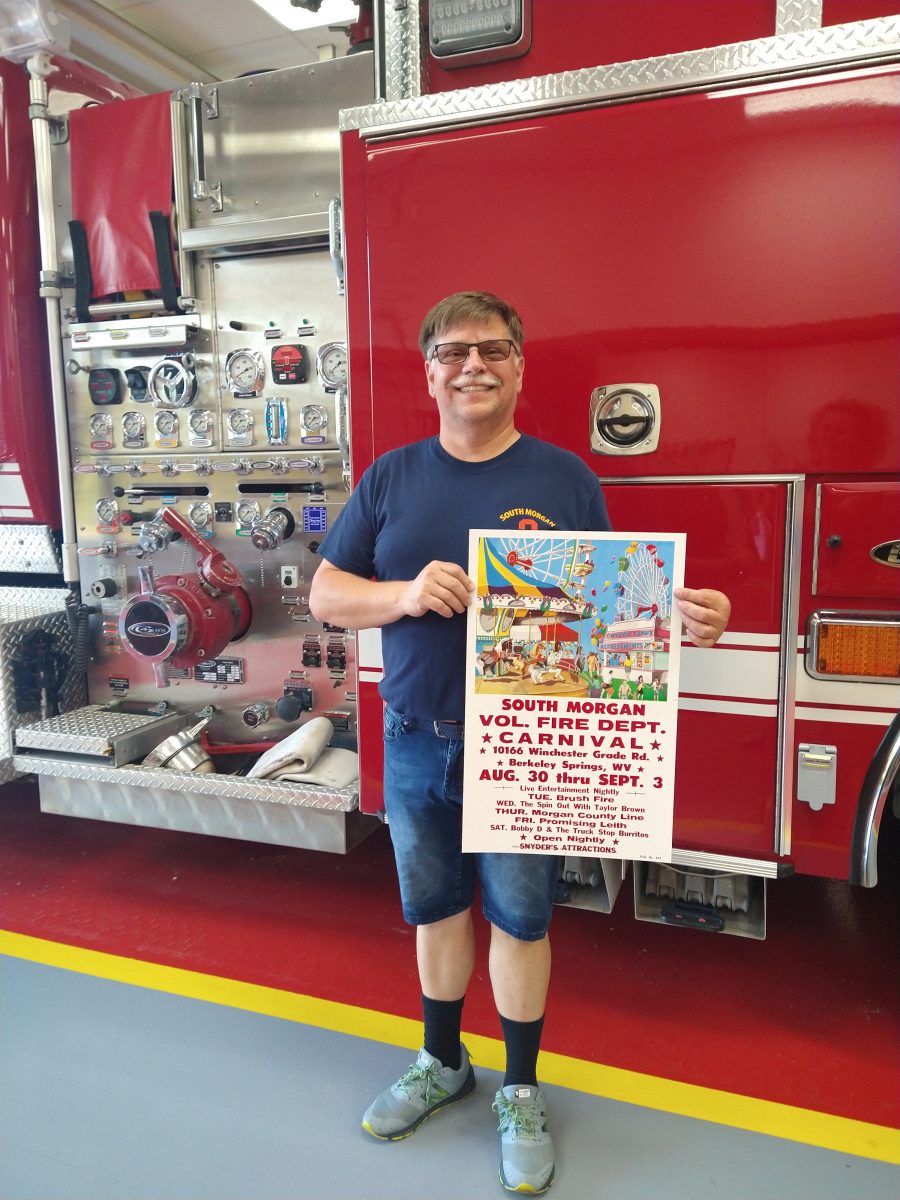 Dale Heironimus holds the Fireman’s Carnival poster in one of the bays at South Morgan Fire Department. The carnival begins August 30.