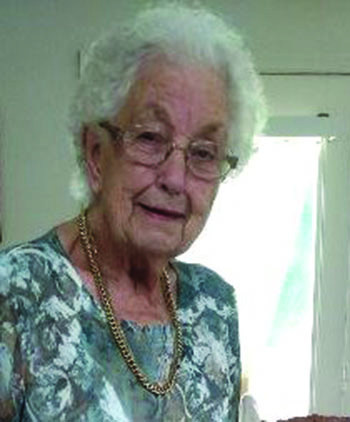 She was born February 10, 1922 in Mullins, W.Va., and was the daughter of the late Coburn and Eva McMahan Davis.

She was a member of Woodrow Union Church in Paw Paw.

She loved to read romance novels, fish and gardening.

She is survived by two daughters, Tomi Chittum (Charles) of Mt. Sidney and Nancy Smith (Daniel) of Manning, S.C.; a special granddaughter who was raised in the home, Brandy Williams (Shane); two grandsons, Steve and Matthew Smith; great-grandchildren, Dakota Williams, Trevor, Samantha, Brittany, Jake and Myles Smith. In addition to her husband and parents, a sister, Mavis R. Hood.

She will be cremated and there will be no services at this time. She will be interred in the Mausoleum at Shenandoah Memorial Park in Winchester along with her husband, at a later date.

Memorial contributions may be made to Waynesboro Manor, 809 Hopeman Parkway, Waynesboro, VA 22980, in her memory.